Free West Media reported on April 2, 2022 that 15 tennis players have dropped out of the Miami Open due to unexplained illnesses. Fans and the news media wwere flummoxed and unable to explain the weird turn of events. Two favorites to win the tournament, Paula Badosa and Jannik Sinner, both dropped out after becoming “unwell.” Badosa is soon to be ranked third in the world.

Jannik Sinner was only able to compete for 22 minutes before he bent over on the court and was unable to continue. His opponent, Francisco Cerundolo described it as very strange. Free West Media offered no analysis about what caused the sudden wave of resignations from the tournament from physical infirmities. 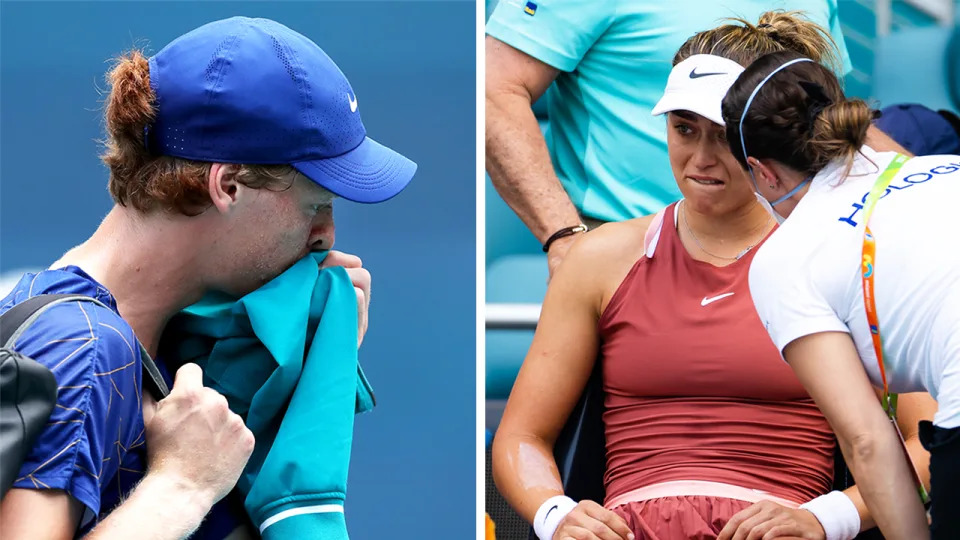 Please be mindful that one of the common side effects of the COVID-19 mRNA vaccines is blood clotting, which often causes muscle and joint pain, which could be masked by being reported as an “injury” to a muscle or joint.

J.D. Rucker, writing for The Liberty Daily was not so reticent to comment on the cause of the Miami Open carnage. J.D. Rucker opined:

Nobody is pointing to the obvious. All of the players must be “fully vaccinated” [against COVID-19] in order to compete. Just as we’ve noted for several months, most major sports have been hit with “inexplicable” medical conditions popping up in young and otherwise healthy athletes, including our report that three cyclists fell in March alone.

Folks, this is the [COVID-19] jab. There is no other viable possibility, especially when we consider how even the CDC and other agencies have acknowledge the Covid “vaccines” cause increases in heart problems for young people, including myocarditis, pericarditis, and heart attacks.

There has never been as much gaslighting and propaganda geared towards covering up the truth than with these [COVID-19] injections. Leaders across the country and around the world have so much wrapped into the vaccines, one has to wonder who’s pulling the strings. Some of it is personal; any politician who comes out with the truth about the jabs will be pushed out of office faster than Will Smith’s exit from Hollywood’s elite club. The same is true for journalists. Corporate media is just as invested and possibly even more complicit in spreading the lies.

But it may be worse than that. Like so many things we’ve witnessed over the last three years, there appears to be a coordinated effort to suppress the truth. Pandemic Panic Theater is still in action despite the odd February push by Democrats to lift most face mask and vaccine mandates. There are already talks of 5th and 6th jabs even as the 4th jab gets rolled out in the United States.

Is this all part of The Great Reset agenda? Is it all about control? Depopulation? The answer to all three questions is very likely, “Yes.”

These [COVID-19] injections are dangerous. Athletes across the globe are falling. Average people are experiencing horrible adverse reactions. Tens, perhaps hundreds of thousands of people are dying from them. It could even be millions; the data is so obscured. All the while, politicians and corporate media are pretending it all away is if there’s nothing to see here.

Follow the SILENCE: Paper Proving That COVID-19 Vaccines Cause Myocarditis Is Removed From Publication Without Explanation